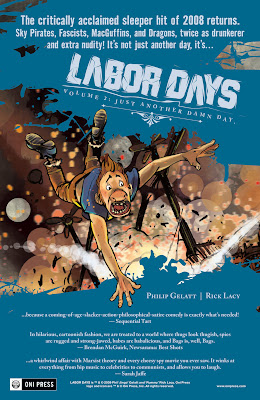 Phil Gelatt, writer for the Oni Press series Labor Days was kind enough to answer a few questions and then ask a few of his own. Enjoy:

1) We know each other from comics, but you are a trained film maker. How did you first become involved with comics / Oni Press?

PG: I became involved with Oni via a fairly circuitous route that has actually nothing to do with my film background. Or, I guess, tangentially it does. Let's start there: to make a film it takes truckloads of cash and a small army of the willing. To make a comic book it takes, at the very most, what? 5 people? Maybe 6 people?

So, when I started writing, way back when, it was kind of a matter of taking the path of least resistance. I had always been both a fan of comics and movies, but honestly, at the time, I was seeing way more creative work being done in comics AND it seemed to me way easier to make a comic for the aforementioned reasons. I happened to know a few talented artists and so I hooked up with one of them and started working on comic book stuff.

2) What was the inspiration behind Labor Days? How did you present it to Oni?

PG: The inspiration, that's actually a pretty difficult thing to pin down. The origin of the story came basically from Rick (the artist) and myself sitting around being bored one day and him saying "Let's just do a book about a guy who's looking for this tape and he's always just thinking to himself 'God, what's on that tape?!'" Rick was, if I recall, joking about that being a good idea for a story. But apparently I didn't get the joke, because I found it an intriguing notion and took it and then sutured in various things I was interested in at the time including, but not limited to, greek mythology, marxist ideology, fire breathing, spies and train rides. And out came Labor Days.

We presented it as a two page pitch document, a few pages of script (all of which got re-written eventually) and probably about 10 pages of Rick's artwork. It was a neat little package.

Okay so big bold broad question, where do you normally find your inspiration? What gets you up and writing in the morning?

AA: Up and writing in the morning? Usually a deadline. Actually, I get up when husband gets up, read over what I wrote the day before and then try to crank out some words. Some days are more productive than others. If I’m full on writing (and not just trying to think of plot) I set myself to 1,000 to 1,200 words minimum. If it’s a script or a comic book script, I try for four pages. This can vary wildly from day to day, but if I don’t have 5 – 6K done by the weekend, I make it up then. Yes, I try to be disciplined, but it’s not always easy.

Inspiration seems to just come randomly. Sometimes it’s a bizarre dream; sometimes it’s something I’ve read in the newspaper. I get a lot of my ideas when I’m traveling. The fresh brain of being out of my regular environment, I guess.

3) When will the 3rd Labor Days his shelves?

PG: Labor Days Three currently resides only in the minds of Rick and myself. We'd love to do a third one but we haven't had the time or energy to get it under way. We have, I think, what'd be a great third volume in mind but it would be a pretty severe departure from the first two and that would mean putting a lot of energy into it that neither of us have had up to this point.

I have another book with Oni coming out this summer called Petrograd that I'm very pleased with. In a sense it actually examines many of the same themes as Labor Days but through a very very different lens.

3 ½) What can you tell us about Petrograd? The story? The artist? When will we be able to get our hands on a copy?

Petrograd (sans the "e") is being drawn by a gentleman named Tyler Crook (http://superskoda.blogspot.com/). He's an enormous talent and an all around cool dude. The book is a historical spy epic about the assassination of Rasputin and the coming of the revolution to Russia. So it's pretty dense, very steeped in early 20th century history, but also pretty fun. And we make a meal out of the assassination scene, it gets very intense. The book comes out in August, I think. 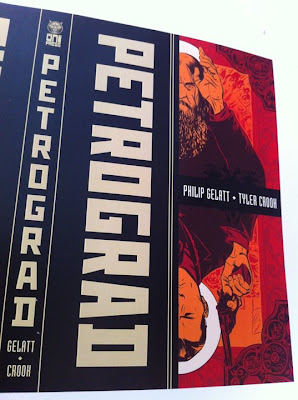 What's your next project to come out? are you excited about it? Do you usually get excited when something new comes out or do you get nervous?

AA: I have a Betty and Veronica novella coming out in May for Archie Comic / Grosset & Dunlap. It’s franchise work, but pretty darn fun franchise work.

I usually get the most excited when I land a contract. By the time the book / comic book / whatever comes out, I’m usually mired in something else and I’m always a little surprised like, ‘Oh, yeah…’

4) You write screenplays as well as comics. What do you see as the differences in these two types of writing?

PG: They are like twins but twins that were separate at birth and went through completely disparate upbringings. For both you are writing images for other people to realize, which is weird. Neither form of writing is an end in itself, they're both just first steps on the road to finished a project.

I guess I'd say the big difference comes in tense of writing, if that makes sense. Comics are written in singular moments; the comic panel isn't great at showing motion. Films are written in more of a present tense, when you write a movie you don't have to slice up time frame of the story so much. God, does that even make sense? In my head it does.

What it means basically is that when I switch gears from one format to the other, I always have to put my mind through a bit of a ringer.

What about you? You write novels as well as comics, how different a process do you find that to be?

AA: I think I understand what you mean about tense, but I can’t explain it any better.

I like writing comics because I like visualizing the action panel by panel. And I also like trying to build up tension for each page flip to drive the story forward. Plus, I love writing dialogue so it’s fun to just write mostly dialogue and then give notes on the action without having to craft it so that it’s absolutely perfect. And there are certain stories that work at graphic novels that just wouldn’t gel as novels. The visual is so important.

With that said, I like writing novels because you are pretty much depending on yourself and a few fellow writers to give you constructive criticism. Then, of course, courting an agent and an editor, but, like you said, it’s down to a group of people you could stuff in a closet if necessary. That’s probably what keeps me from trying my hand at film again. Describing the action, making it flow and connect is more challenging for me in novels, but I think (hope) I’m getting better at it.

5) You also direct movies. What are the similarities between directing a film and creating a comic.

PG: "Movies" is an exaggeration, I directed a movie. To direct a movie and create a comic are almost completely different skill sets. To edit a movie, and to make a comic are very similar skill sets, actually. But when you're on set, and everyone is staring at you and waiting for you to say something and you only have about 2 minutes to make a shot as perfect as it is in your head... there isn't a parallel experience in comic book making to that kind of pressure. Thank the heavens.

I find working in comics to be stressful to a point but you never end up spending 14+ hours on your feet arguing and struggling and suffering disappointments. So it's pretty different. And yes, as you might be able to tell, I found directing an incredibly strenuous and almost painful process.

6) I think this is a well kept secret, but a lot of male comic book creators have extremely hot wives and girlfriends. How do you explain the good fortune of the men in this field of work?

PG: I have no idea. I'd love to say we're inherently charming or handsome or sexual dynamos, but clearly those things aren't true. We must just be inherently lucky.

Is there a similar occurrence with women in the comic book field? Do you always end up with hunks?

AA: I haven’t met many of the boyfriends / husbands of the female creators I know, so I can’t make a general statement. The first thing that attracted me to husband were his diabolical eyebrows. They belong on a Western villain in a Bollywood musical. The kind of baddie that stand in the corner and glower while everyone else sings and dances in brilliant costumes.

7) How did you and Rick Lacy (illustrator for Labor Days) start your working relationship? How did Labor Days come about?

PG: We had known each other for a little while through mutual friends. And one day I think I just said "let's do a comic together" and he was like "oh yeah, for sure." And then we did. It was almost entirely painless. We have, since then, had our ups and our downs and our arounds, but we have a core understanding of each other's creative impulses that has really gotten us through.

The guy I've worked with on Petrograd has been equally painless to work with. I seem to be almost as lucky with artistic partners as I have been with Vicki (my wife).

How is it for you working with artists?

AA: (Vicki is fabulous, no doubt.)

I’ve had some ups and downs with artists. The best is when you’re working with an artist that just gets you and what you’re writing. That’s a pretty sweet deal.

Thank you very much, Phil! Please keep us updated as your movie and comics come out!

Check out the Labor Days blog! 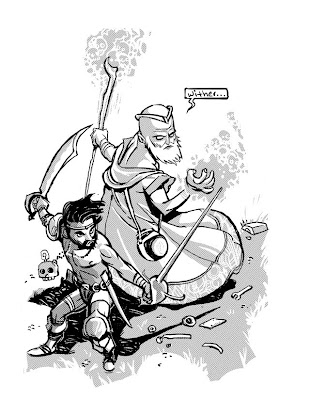 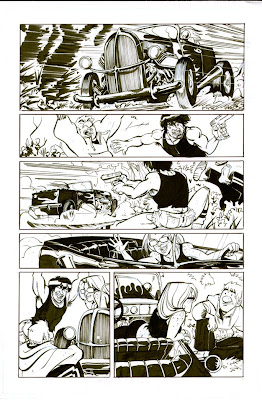 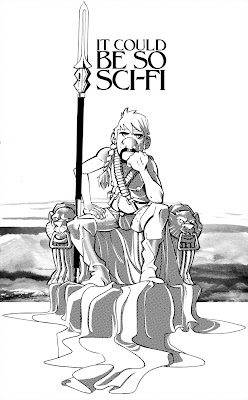