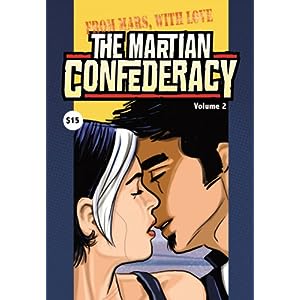 AA - What are the details of the second book in The Martian Confederacy series, From Mars with Love, launching right now?

JM - The second volume finds our trio of outlaw anti-heroes leaving Mars and venturing into space to save a group of children who have been kidnapped for mysterious purposes. Along the way they sell each other into slavery, fall in love and discover the hidden secret of Mars’ orbiting moon.

The book is illustrated by the fantastic Paige Braddock and published through her company, Girl Twirl Comics. It’s 150 pages of blockbuster fun in moody blue hues and retails for 15 dollars.

AA - How did you first start working on the project?

JM - Paige approached me a few years ago to write a sci-fi book for her and gave me a handful of sketches to inspire me. She was looking to step outside her comfort zone and have someone else do the writing. At that point she had the talking bear figured out and had a few sketches of beautiful women hanging around trailers on the Martian landscape. I tacked her concept artwork on the wall and let the images bounce around my head until I had the basic story. I write the scripts specifically for her sensibilities.

AA - Where did you come up with the idea for The Martian Confederacy?

JM - I was influenced by post-colonial writers like Jamaica Kincaid and Gabriel Garcia Marquez. Mars is a stand-in for many third world nations that regain control of their country only after all of their natural resources and culture have been obliterated. The plot of the first book is a sci-fi riff on the privatization of the drinking water in Brazil. 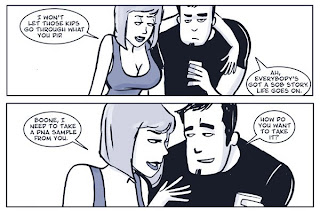 AA - I know you to be a huge horror fan. What’s your favorite horror movie and why?

JM - My father, god bless his parenting skills, would take me to see all sorts of horror films when I was a child, but none convinced me that I was about to meet a bloody death as much as Halloween. The simplicity, the expressionless-masked villain, the general sense of the unknown, only serve to make it more terrifying. Your mind attempts to rationalize what cannot be understood or explained. Carpenter’s film is also a perfect slow burn of atmosphere and creeping terror leading into a perfect third act. I’d also highly recommend Dead Of Night (aka Death Dream), Eyes Without a Face. (Les yeux sans visage), Deep Red (aka The Hatchet Murders) and Cemetery Man.

AA - What’s so fabulous about your girlfriend, Phoenix Zoellick?

JM - The thing that impresses me most about Phoenix is she gets an idea for a project and she makes it happen. Be it making her own clothes, writing and illustrating a kids book, starting a line of beast hats, painting fine art portraits or logo designs commissions…she does many things well and is constantly driven to do more. I’m very impressed by that. She’s not exactly hard on the eyes either…

AA - Besides writing comics, you also write for video games. How did that come about?

JM - I was tapped by a fan of my comic book work to co-create the PIE THEORY alternate reality game for a Sun Microsystems product launch in 2009. The game was about an alien that had instigated major technological change at key points in history and was about to return. It was a massive undertaking to interact with and write around an international online community of thousands. Many times we had to pivot the story line to stay ahead of the gamers or to cover our asses when game challenges were solved too soon. In addition to writing daily content for the duration of the 40-day game, I also played a character in the video segments. It was the most challenging job I’ve ever had and I would do it again in a second.

AA - What is your favorite font?

JM - I’ve always enjoyed Comic Craft’s Jose Laddron font. I lettered my first comic book with it and I still get excited when I see the font in other books. It’s like seeing an old flame.

AA - Why do red heads have more fun?

JM - As a protected species we can act without consequence. Also we can park wherever we want.

AA - What convention will you be attending next?

JM - This August, Phoenix and I will be promoting her line of Beast Hats at the Rocky Mountain Fur Con in Denver, if you can believe it. After that I’ll be appearing at the Alternative Press Expo here in San Francisco.

AA - What are you working on now?

JM - I am finishing up The Rattler, a horror graphic novel about a man who is forced to become a serial killer in order to find his kidnapped girlfriend. It’s being illustrated by Greg Hinkle, an amazing up-and-coming artist. I can’t wait for people to read this book; I’m very excited about it.

AA - If you weren’t a writer, what would you be doing?

AA - Who is your least favorite super hero and why?

JM - I’ve been reading comics for nearly 30 years and I’ve never bought a Superman comic. He’s a character that can’t be hurt and doesn’t have character flaws; I just don’t see the appeal.