Fangs for Nothing - Prologue 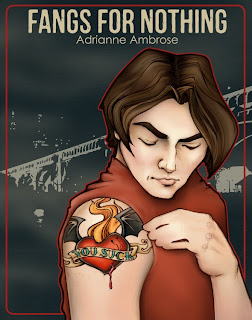 “Do you want to see the vampire?” the old man hissed. I was wandering around Chinatown by myself because my friends were lame and wanted to go dancing instead of actually trying to see something of the city. The answer to the old guy’s question was yes, damn straight I wanted to see the vampire. I mean, if there was one available for viewing.

Judging from the thick layer of grime he was sporting, my new friend was more than likely a homeless person. He drew a crude map on the back of a Lone Dragon Restaurant menu some hawker had forced on me earlier and I had yet to throw away. “And take this,” he said, pressing into my hand a dirty, sealed envelope which he had fished out of his crusty overcoat. “Don’t open it till you get there.”

“What is it?” I asked, wishing I had some handy wipes or something. The envelope was a bit sticky and I didn’t want to think about what had made it that way.

“Something you’ll want,” the old dude rasped. He cracked into a jack-o-lantern smile, “Trust me.”

After that, he gave me the usual shakedown for money and I ended up parting with two bucks. If I got to meet an actual vampire, it was a good deal. And even if I didn’t, the old guy looked like he could use the cash.

Following the map, I crossed the street and made a left down an alley. San Francisco’s Chinatown had been crowded with vacationing families pawing through piles of silk fans and faux jade talismans when I first started looking around. After the sun went down the tourists quickly evaporated. Besides the old guy and the customers at a few late night noodle shops, I was pretty much on my own.

Making another left down a smaller, darker alley, I nearly bumped into a young woman leaning against a wall. She was Caucasian, but wearing one of those snug fitting Chinese silk dresses with the high collar. Burnt red chopstick pierced a dark brown bun of hair piled on the top of her head. Lifting a clove cigarette to her crimson lips, she gave me the eye. “Are you here to see the vampire?” she asked in a gravelly voice.

“I thought so,” she said, dropping her cigarette to the pavement and grinding it out with a stiletto clad foot. She grabbed me by the arm, “Come with me.”

Up close I could see that she was probably in her early twenties with large dark rings under her eyes that she’d tried to conceal with makeup. Somewhere in the distance I could hear the muffled throb of music from a dance club. Xander and Rini were going to be miserable that they’d chosen to try to sneak into a club instead of hanging out with me. “So this is a real vampire?” I asked as she hurried me along.

“Shhh,” she hushed me, pausing to listen. In a voice just above a whisper she asked, “You never met a vampire before?”

A grave look crossed her face and she nodded. “Okay.” Hiking up her dress she pulled something out of her black lace garter. “You’ll probably want to hang on to this.”

I was so intrigued by my glimpse of the top of her stocking that I almost didn’t grab the thing she thrust at me. “What is it?” I fumbled. It was a long cone shape with a very pointy end. I became acutely aware that Miss China Doll Dress had just handed me a stake.

“Come on,” she began pulling on my arm again, hurrying me further down the alley.

At that point I was pretty excited. I was armed, had a hot babe at my side and I had been assured by no less than two San Franciscans that I was about to meet a vampire. The only thing that gave me pause was the stake didn’t have the heft I would have expected. It felt more like balsa wood than an implement strong enough to drive through a vampire’s ribcage and into his heart if necessary. Not that I was planning on snuffing a vampire or anything, but it was good to be prepared. China Doll didn’t seem too ill at ease so I let her confidence bolster me. It was weird that she was my voluntary guide, but I assumed I was reasonably safe. Unless she was one of the vampire’s servants who brought him his dinner each night, choosing from whomever was foolish enough to wander the abandon streets of Chinatown after sunset. That idea made me slightly uncomfortable. She was urging me faster and faster down the darker and darker alley.

“Uhm,” I was starting to feel a little nervous. “You know, my friends would probably really like to meet the vampire too. In fact, they’re waiting for me right now. I should probably go get them and then I could meet you back here.”

“Here,” she said, jerking me to a stop. “We’re here.” We stood in front of a large wooden door. It looked about a zillion years old and the large windows on either side of it had been bricked over. “Do you have something for me?” China Doll asked. When I gave her a confused look she added, “Something the old man gave you?”

“Oh… yeah,” I pulled the sticky envelope out of my jacket pocket.

“Open it,” she commanded hammering on the door with three loud strokes.

My hands trembled slightly as I worked at tearing open the envelope. “Hurry,” she told me. “What does it say?” The clouds that had been crowding the sky all evening chose that moment to part and the light from the moon shown down on us. As I pulled out a piece of paper and unfolded it, I could hear someone on the other side of the door turning a very rusty lock. “Read it. Read it now.”

I squinted, confused, “Two for one drinks until midnight?”

The door flew open. “Velcome to Fangtopia!” a balding Dracula in plastic fangs called out. Before I could get my bearings, I was ushered inside. “Fangtopia is San Francisco’s only roving vampire dance club.”

“He got two for one drinks,” China Doll chirped in a bright voice, instantly more cheerleader than seductress.

“Congratulations,” Dracula said as if he was genuinely happy for me. “Now all I need is to see some ID. And there’s a twenty dollar cover charge.”

I peered into the poorly lit room. About a dozen Goths dressed in black swayed listlessly on the dance floor. Others lounged on battered couches looking bored. The whole place smelled a little too much like sour dough bread. I wouldn’t have wanted to go in, even if I had a fake ID.

My vampire host was getting impatient. I could tell he didn’t like me sizing up the club. “Come on, kid,” he said, clapping his hand on my arm. “You got twenty bucks or what?’

“Suck it, Dracula.” I jerked away from him, dropping the stake in the process. It bounced off the dance floor with a hollow fwap, nothing more than spray painted plastic. “I’m out of here.”