Anyone who knows me is without a doubt that I have a soft spot for my home town, Cleveland.

Because it's awesome. (Open up your mind, you star bellied sneetch, there are more than just three cool spots on the planet.)

Anyway, I was pleased as punch to see Details doing an article that features my honey: 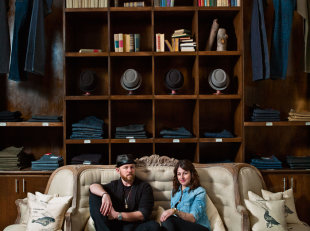 Once, Cleveland stood alongside New York City and Paris as a preeminent garment center. While the city is unlikely to reclaim that stature, the Dredgers Union is bringing back made-in-the-Midwest style. Located in a 10,000-square-foot former department store on happening East 4th Street, the 10-month-old boutique does a brisk business in its in-house sportswear lines, which are produced entirely in the heartland: "Our region minus manufacturing equals broken," explains menswear designer Sean Bilovecky, 36, who founded the company with Danielle DeBoe. The store also stocks more than 100 other apparel-and housewares-makers, ranging from the emerging (Lifetime Collective) to the established (Ben Sherman). “In the past, record companies thought, ‘If new acts make it in the Midwest, they can make it anywhere,’” Bilovecky adds. “I think this logic goes for brands and retailers today.” 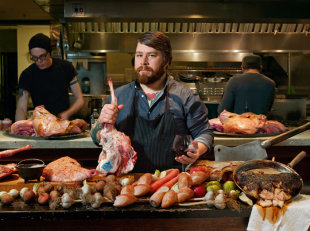 Culinary wunderkinder often leave cities like Cleveland; they rarely come home. But after stints in New York City at the now-defunct Kitchen 22 and Parea, native son Jonathon Sawyer returned with dreams of owning his own place. In 2009, he opened the Greenhouse Tavern, a three-story eatery built with reclaimed materials that serves French-inspired dishes with ingredients—heirloom beans, foraged ramps, freshwater prawns—sourced from within state lines, often accented with Sawyer's acclaimed made-from-scratch beer and wine vinegars. After the restaurant became a hit, the 31-year-old chef opened Noodlecat, a ramen shop inspired by spots in Tokyo and New York, around the corner; its space doubles as the venue for Brick & Mortar Pop-ups, a dining series featuring visiting chefs. “We’re tired of being behind the rest of the country,” Sawyer says. “We’ll open every kind of niche concept to keep our city viable.” 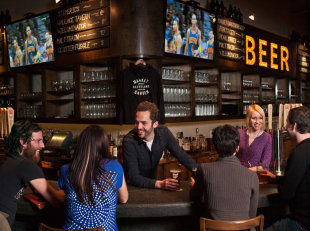 When he was growing up, Sam McNulty and his family would go grocery shopping at the century-old West Side Market, then the only reason to come to Cleveland's Ohio City neighborhood. "The area was sketchy, but it was so cool—all these empty old brick buildings across the river from modern Cleveland," the 37-year-old brewer and local booster says. "I knew I'd end up back here." In 2005 he did return, opening the Belgian-focused McNulty's Bier Markt in a storefront across the street from the venerable food bazaar. Two years later he partnered with chef Jonathon Sawyer on Bar Cento, an Italian joint next door that pairs a deep beer and wine list with gourmet pizzas, and in 2009 unveiled Speakeasy, a retro cocktail bardownstairs in (natch) a onetime speakeasy. His latest contribution to the now-thriving hood is Market Garden Brewery & Distillery, a bar-restaurant in a former slaughterhouse that lets you store perishables from the West Side Market while sipping one of 32 craft brews made on site (and soon small-batch whiskey, rum, and vodka, too). As McNulty's favorite saying goes: "Beer is proof that God loves us and wants us to be happy."