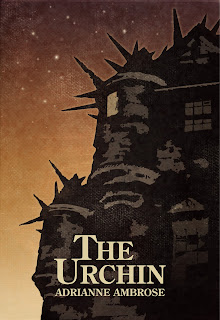 The Urchin is my 95K word novel now available as an ebook on Amazon for 99 cents and soon to be available on all ebook retailers for the same price. (Check to see if it's been posted on your preferred carrier.) Here's the blurb to pull you in:

Since the End came, leaving the United States a confused and desolate wasteland, what is left of society has been trying to pick up the pieces and put itself back together. Nick Miller is willing to do whatever it takes, and is flying a top-secret mission over the devastation when he is forced to make a crash landing. Luckily, he is rescued by the brooding, enigmatic Vance Amherst and his dubious crew of teenage boys, who are eking out an existence in the remains of their boarding school. But Nick quickly realizes that something is very wrong at Stanton Academy: the school has been turned into a fortress bristling with giant spikes; the boys, armed to the teeth with wooden stakes, exude a desperate, fearful discipline; the teaching staff is conspicuously absent. And night is falling…

Here is a sample chapter to get you started:


The Urchin
By A. M. Ambrose

The terrain was rough, littered with crushed refrigerators, rotting shoes and glinting shards of glass, the wreckage of a civilization that had abruptly disintegrated.  Rick and Martin were nimble enough on their bikes, darting and swooping around the debris, but with the board balanced between them, Vance and Dave’s progression was significantly slowed. Martin was having trouble keeping pace with the other two. He kept pulling ahead, apparently intent to get to wherever they were going, but then he would look over his shoulder, note the large distance between them, fall back to ride at Vance’s side.
Nick clung to the board, trying to keep his balance with his satchel cradled in his lap. It wasn’t easy. Looking over at Vance he estimated his age to be about sixteen or seventeen. He had a pale, but handsome face with steely blue eyes set in dark lashes. His jaw was clenched as he stood up on the pedals, using his whole body to propel the bike forward as quickly as possible. “Wwhhat aaare yoouuu kiddsss doooingg heerrreee?” Nick tried to ask as he was jounced along, but his query went ignored. On the other side of him, Dave was equally intense, his body bobbing back and forth with his effort to pedal, his hands gripping the handlebars so tightly his knuckles were white. Even though the bikes were locked together by the board, Dave surreptitiously kept glancing in Vance's direction every few seconds.
After several minutes of enduring his uncomfortable conveyance, Nick noticed something in the distance. It was a building, strangely out of place in a landscape of devastation, but large enough that, in full daylight, he would have probably seen it from his plane. The whole image was strange and discomforting; as if he had just been transported into the heart of a Dali painting where incongruous objects have been dropped by an absentminded giant into a monochromatic desert. Someone had erected a bizarre scaffolding of wooden spikes all over the structure so that it appeared like an enormous sea urchin bristling in a tide-less wasteland. “Whhhy...?” Nick chattered, mostly to himself, realizing that no one was likely to take the time to explain the building’s appearance.
Rick was waiting at the building’s rusting front gate. He’d dismounted his bike and flung it on the ground to the side of the entrance. He’d taken his bow from its quiver and had an arrow nocked and ready to fly. Martin, unable to reign in his fear any longer, sped ahead to join him. Vance and Dave skidded their bikes to a halt and Nick was propelled off his perch, only catching himself from falling with a few running steps. He peered through the bars of the gate to see that dozens of boys were crowding the front windows of the spiky building. Turning to Vance, Nick asked, “Why’s this thing covered with ...?”
“Stakes?” Vance supplied. “Call the rear guard,” he told Dave before giving Nick a spare glance. “It keeps our old friends from coming home to roost.”
“Oh, well that explains it,” Nick mumbled to himself.
Dave put two fingers to his lips and blew a loud, shrill whistle. “Should we take the new-comer inside?” he asked, lowering his hand.
“No, stick to procedure.”
Dave’s face tightened as he looked into the encroaching night. “Where are they? They'd better hurry.”
Vance pulled out his pocket watch and flipped it open. Standing at his shoulder, Nick was able to get a good look. A window in the face of the time piece represented a.m. and p.m. with a sun and a moon that slowly rotated with each passing minute. At 6:12 p.m., the watch was just about to move forward to totally eclipse the sun and only show the moon.

Kelly and Scott were both gripping the handlebars of their bikes for all they were worth, but that was the only indication either of them was willing to concede that he might feel tense in any way. The sound of Dave’s whistle piercing the air made them both sit up just a little, but besides that neither immediately reacted to it. “There’s the signal. Ready to go?” Scott finally asked, his voice casual.
“If you’re afraid, go ahead,” Kelly replied.
Scott gestured in the direction of the Urchin with a half bow, “No, no, after you.”
“No, I insist. Age before beauty,” Kelly countered.
Scott kicked off and began madly pumping his bicycle’s pedals, raising a small cloud of dust. He called over his should back to Kelly, “Pearls before swine.” After stalling for a moment, Kelly started furiously pedaling in pursuit of his friend.
Back at the Urchin, Martin was trembling. He stood as close to the gate’s entrance as possible. “The others are coming. I can feel it,” he said in a hoarse whisper. “Why won't they hurry?” Without looking at him, Vance reached out and put a steadying hand on Martin’s shoulder.
“Here they come,” Dave said with some relief.
The rear guard made their appearance in the distance, using the full weight of their bodies to cranks the pedals, but still managing to zigzag dexterously around the larger fragments of rubble as they headed towards the gate. “And our buddies are right behind them,” Vance added, knowing the truth more than seeing it.
“Who?” Nick asked. He could barely make out Scott and Kelly on their bikes. There didn’t seem to be anyone following them.
As the sun was completely engulfed by the horizon, three enormous birds rose out of the darkness, flying through the air at an amazing speed. They appeared to be pursuing the boys.
“Fuck.  It's Old Gym,” Dave muttered, half under his breath.
Nick could feel Rick and Martin shifting on the ground behind him in agitation. “Asshole,” he heard Rick utter.
Vance fixed Nick with a steely glare. “We shouldn't have waited for you.”
“What are those things?” the pilot asked, too mesmerized to take offense at Vance’s words. “Birds?” No one answered him. They were intent on the efforts of the rear guard.
The creatures looked so peculiar. Not like birds at all. They didn’t flap their wings, or even appear to have wings, for that matter. An idea occurred to the pilot. “Men?” he wondered aloud. “Are those flying things men? How are they…?” he couldn’t even think of the words to finish his sentence. “What are they doing?”
The rear guard was getting closer, but so were the flying creatures. “Should we go inside?” Dave asked, his voice carried an edge like a scalpel.
“No,” Vance was firm. “We stand our ground until we can all go inside.” Turning, he thrust something into Nick’s hands. “Here, you might want this.”
Nick looked down at the sharpened wooden spike that had been pressed upon him. “What? Why?”
“Hurry!” Martin shrieked at the rear guard. Even though they were pedaling with all their might, their progress felt painstakingly slow. All of the scouting party had their bows nocked and ready for action.
Finally Scott and Kelly were nearing the gate, but their pursuers were almost upon them. “Get ready to close,” Vance shouted to the numerous faces watching from the windows.
Nick could feel the waves of tension radiating off the guys. “What the fuck are those things?” he demanded in frustration.
The largest of the three creatures swooped out of the sky and snatched a shrieking Scott right off of his bicycle.
“Vampires!” Vance shouted.

If you've enjoyed what you read, you can download the full novel of The Urchin on Amazon (and other ebook retailers) for only 99 cents.
Posted by Adrianne at 10:31 AM