Daisy Cooper and the Sisters of the Black Night

I had the pleasure of corresponding with Robert Dee, the author of Daisy Cooper and the Sisters of the Black Night. I love how girl-positive the story is, so I told him I'd share a few links. Robert was also kind enough to do a quick interview. See below:

Daisy Cooper and the Sisters of the Black Night - YouTube

And don't forget the interview:


AA - Where are you from?
RD - I’m a writer based in Brighton which is on the south coast of England. Previously I lived in Amsterdam for a couple of years and before that in London. Brighton is a very artistic city sandwiched between the sea and enormous rolling hills we call The Downs. It is a good place to be for a writer.
AA - When and why did you begin writing?
RD - I’ve always written stories for as long as I can remember and it’s second nature to me now. It amuses me a bit when people go “oh! you’ve written a book!” because I don’t talk about it much (or I didn’t, now I’ll promote it to anyone). I learnt after years of telling stories in bars and cafes that you have to keep quiet until you’ve actually done it or you can talk it out. I really believe that. I don’t worry about running dry, though. If anything, I'm worried I won't get to write all the ideas I have backed up! I keep journals and I always have a notebook with me so I don't tend to lose any. Ideas come from odd places and often I’ll have a little seed - something that excites me for some reason - and I start dreaming, following the story and seeing where it goes. I know a story is ready for me to start writing when it’s incubated in my head long enough for me to forget where it came from. It becomes it’s own thing.

AA - When did you first consider yourself a writer?
RD - I can place this exactly. I was nine years old and I’d written a story about a werewolf buried in my back garden. My classmates all gathered round me listening. No one made a sound. It was the first thing I remembered doing that got that much attention and I thought “so this is what I do.”

AA - What inspired you to write your first book?
RD - I wrote a bizarre novel when I was eighteen about a man who turned into a UFO, kind of. That took me about eight years to finish. I was finding my way. My dad joked that I wouldn’t exactly be prolific. It was a good apprenticeship. I have looked back at it and some of it’s good, some of it overly earnest or wordy. I was influenced by Burroughs, Vonnegut and that generation of writers who I admired. I’ll probably return to it at some point to see if I can do anything with it but I view it as practice, really. That whole 10,000 hours thing where you have to keep doing something and doing it until you get good. I remember before that trying to write a Sci-Fi novel when I was fifteen. I kept writing the first few pages over and over in long hand and was frustrated that I couldn’t say what I wanted to. I remember thinking at the time “If I keep doing this, one day I will be good.” I wouldn't say I'm good now, but I'm definitely better. 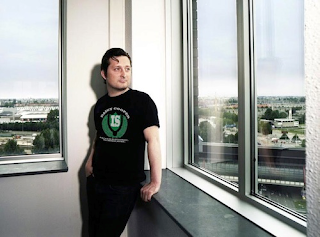 AA - Do you have a specific writing style?
RD - Writers I like stay out of the way of the story and the characters and I hope I’m like that. It bugs me when I read a book and notice the author’s voice too much. I’ve worked as a video editor so I understand that it’s the invisible stuff - the thing the viewer or reader doesn’t notice - that makes it gel together. Aside from that I think the story dictates the style. Getting the right tone is half of it and I think I managed that with Daisy Cooper. I worry about losing it but then I worry about a lot of things when I’m not actually physically writing it.

AA - How did you come up with the title?
RD - I don’t remember how I came up with the idea for Daisy Cooper but I do remember that it was fully formed. That’s quite unusual for me. I know this because I was telling a housemate I was living with about it hours afterwards. She loved the idea. It was also very different from the twisted twilight zone style stuff I’d done before. I think my brain rebelled against the dark weird ideas and just wanted to tell a straightfoward and hopefully good story. I’m so glad it did as I’ve loved writing every word of it. I was worried that the title sounded Harry Potter-like and then I realised it’s just a common children’s book title style. I liked the idea of taking something classical and putting a spin on it in. If I had any influences it was more the Enid Blyton books, Roald Dahl and Tove Jhansson who I loved as a kid. I also had Nancy Drew at the back of my mind but that was more through the TV show.
AA - What is the book about?
RD - The book is about a twelve year old girl about to leave junior school who dreams of being a reporter. She dreads going to the local senior school where she will be bullied for her intelligence. Through a chance encounter on her last school trip, she meets an older girl from a school called Darlington that symbolises everything she could hope for. As well as being a brilliant school, it also runs a magazine called International Schoolgirl. International Schoolgirl sends junior reporters around the globe to find stories for the magazine. It’s also read by lots of women worldwide - you’d imagine Hilary Clinton having a copy, for instance.
Daisy fights for a place at the school where she meets the 88ers, her dormmates, and uncovers a dark secret at the heart of the school after getting lost in the school maze at night. It has underground tunnels, pirates, motorcycle chases, lions, sharks and sword fighting.
The book, as the first in the series, is also about how Daisy makes the journey to become an International Schoolgirl (or does she?). She learns to weigh up the difference between ambition and what is morally right. That’s kind of the theme of the first book. It’s what makes her who she is. Darlington has eight virtues in it’s code and one of them is Honour, which is what the first book is about. The second book - which I’m writing at the moment - is about Grace, i.e. how to behave in the world with honour. I’m not lecturing people, though, hopefully. I just find the virtues work as good thematic glue for the stories.
Each planned book (set in one or more other countries) has a primary story, a secondary story about a girl or woman in history and is part of an overarching narrative for the whole series of hopefully 8 books. I write in a right-brain kind of way but I have a definite idea of where it’s going and I know where each of the next seven books are set. I don’t think it’s complicated for young readers but it’s hopefully enough to keep them guessing. I’m already building up a list of people who can’t wait for book 2!
AA - Why write a children’s book - a series even - with a twelve year old girl as the main protagonist?
RD - Most people who know me would not have assumed I would write a children’s book but I’m a strong believer in the idea that people don’t have stories, stories have them and that’s the case with Daisy Cooper. I’ve no idea where it came from but pnce I had it I knew I had to do it. I was very excited and apprehensive about whether I actually could. I used Joseph Campbell and his Hero’s Journey approach to help me. He’s a massive hero of mine. As for writing with a girl protagonist I’m not sure how to explain it. I think part of it is being an older brother to a sister I was protective of growing up. I’m kind of protective of Daisy that way. You have to care about your characters but you also have to put them through the wringer. I don’t have any kids yet so there’s probably also an element of wanting to be a father there too. It would be wonderful to have kids to read the books to.
As the book went on I was surprised by how much of a feminist stance it took. If nothing else it opened my eyes up to how different things are for women - as a man I’ll never really know. Even working out how a woman could make her fortune a couple of hundred years ago to set up a school. It was impossible. I didn’t want it to be through patronage. I wanted to show the characters earning it because it was important for the character arc that Daisy is on. I think realising this really motivated me to get that across and once I started writing the secondary story set a couple of hundred years ago, the whole book opened up and it all fell into place.
AA - What’s next?
RD - Daisy Cooper and the Devil’s Masquerade which starts of in Amsterdam and moves to Venice. It includes family feuds, kidnappers and a mechanical doll. I have a couple of other ideas for childrens books including one about a boy who goes into the underworld to rescue his brother and another about a girl who builds a hybrid robot war machine out of her horse. The second one's a bit strange!
Plus - Check out this awesome cover! 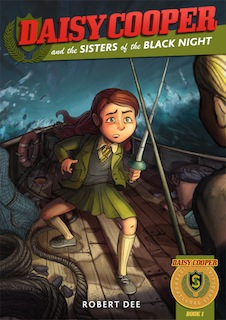