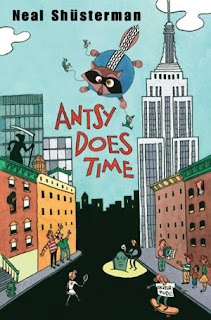 No, this is not a Neal Shusterman fan page. It just feels like it is.

Yes, I've been a bit obsessed with Shusterman lately, but the library is partly to blame for that. I always have a ton of books requested and I cannot be held responsible for the order in which they become available.

Here's what I find annoying about Mr. Shusterman - He's a great writer and can create really unique storylines with well thought out characters then, he can turn around and be super funny. It's so multifaceted that it borders on irritating. It's kind of like a really attractive doctor. Hey, you're already a doctor! Stop with being so good looking already! How am I supposed to talk about my toe fungus or whatever, if you're standing there looking like a model. I also think doctors shouldn't be too ugly. No one wants to be in a paper gown in front of Jabba the Hut.

Anyway, Antsy Does Time it the sequel to The Schwa was Here. And, if anything, it's even funnier than the first book. Not sure how Mister N. Shusterman pulled it off, but he did. And, as usual, it's somewhat thought provoking. Not as much as Unwind, but still, for a light comedy, it brings up some interesting issues.

I admit, I'm in the middle of another of Mr. Neal's books right now, but after that I really have to take a break. At least for a week or two.
Posted by Adrianne at 8:20 AM