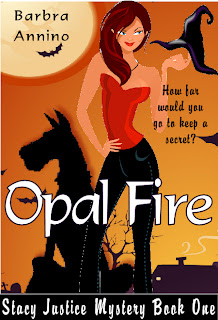 Barbra Annino is an indie writer best known for her Stacy Justice series.

AA - How did you become an indie writer? Please give us a brief history of your writing career.

BA - I've been a professional writer since just after college. I was a technical writer, a journalist and then a freelancer before I tried my hand at fiction. The fictional path to publication was a lot like Dorothy's trip to Oz except I never quite made it to Emerald City.

In 2008, I pitched my first novel to a small publisher at a conference. She loved the premise and asked for the first three chapters on the spot. She enjoyed those so much she invited me to dine with her and introduced me to everyone as her new author. I sent the full script as soon as I got home and promptly never heard from her again. (I would learn the following year at the same conference she was interested, but never received my email.) A few months after that, I landed an agent. When I learned he only shopped the book to one editor in a year, I fired him. Meanwhile, I had written book two, which I felt was stronger. I pitched Opal Fire to a few more agents and publishers and received an offer from a small press in late 2010. Unfortunately, editorial mistakes were made and the novel that went to print was worse for the wear. I took a deep breath, took my rights back and published in March of this year.

I believe the Universe points you in the right direction if you can just read the signs. I had so many mishaps on this journey (more than what is here even) that I could no longer ignore the message I was getting to go indie. So glad I listened.

AA - What kind of justice does Stacy Justice dish out? Please tell us more about this series.

BA - The series centers around a reporter raised by witches who finds herself in heaps of trouble everywhere she turns. Stacy is funny, honest and a major klutz with a deep sense of right and wrong and a devotion to her family that is unwavering--even though they drive her batty. Opal Fire opens in the middle of a burning building. The Black Opal is owned by Stacy's cousin Cinnamon and before long, she's accused of arson and Stacy is determined to prove that theory wrong. What sets the series apart from other mysteries is that the crimes and victims affect Stacy's family and close friends, so the stakes are very personal for her. It's been compared to Janet Evanovich's Stephanie Plum series.

AA - What’s with all the Great Danes on your website? How do you house them and do the neighborhood kids ever try to ride them?

BA - Those are my furkids! They aren't available for rides, but it is funny to hear the comments people make. I was walking Thor down Main Street and someone asked, "Does he bite?" My response was, "Not me."