Confessions of a Virgin Sacrifice - In Between Bit 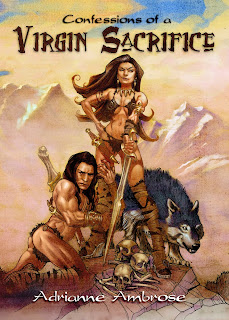 In Between Bit, Part 1

The sun was gaining height in the sky by the time all of the village Elders were finally awake. Most were cranky and stiff from a night of sleeping on the cold, damp ground. The long ride the previous day contributed to their aching muscles.

It had seemed very exciting in the beginning. Two saucy trollops defying tribal customs and threatening the active sex life of every male member of the tribe. Who did they think they were, refusing to kill themselves? It was enough to send the male Elders into a geriatric frenzy.

Segner the Watcher sounded a call to arms. The legendary warriors suited up in the traditional war armor, shoving their bald heads into rusting helmets and wiggling into chain-mail tunics. They grabbed every club, sword, and battle-ax available. It is safe to say that the Elders were adequately or even excessively armed. It's true that two Virgins on the run can be a bit irritable. But it’s nothing that can't be settled with a couple of well-placed crossbows or a box of chocolates.

Sadly, the war steeds were getting a bit long in the tooth. Having been put out to pasture many years earlier, they were strongly against an arduous journey in heavy equipment. In fact, they kept the Elders scampering about the fields for several hours in an attempt to avoid the duty. Besides being shameful behavior for a war horse, it gave the renegade Virgins a longer lead.

Warriors and horses finally suited, the steeds were whipped into a canter and the Elders went clattering out of the village. Unfortunately, no one had thought to consider provisions such as food or water.

By dusk, the angry horde had barely cleared the opposite side of the volcano. Most of the warriors decided it was more practical to sleep in their armor, so as to remain constantly alert. One never knew when renegade Virgins might stage a sneak attack. Besides, it was best to conserve one's strength.

Several of the least rusty helmets were commandeered for cooking pots. Feeble attempts were made to hunt game. By nightfall, the mighty warriors found it necessary to satisfy themselves with a lukewarm broth of berries and bark.

In the bleak light of dawn, or more accurately, early afternoon, the journey that lay before the village Elders seemed daunting. The thought of running a rebel Virgin through with cold steel was appealing, but the whole process of tracking the damned gals down lacked luster.