Feel the need for a skewered look at the Goth scene?

Check out the books by Karl Christian Krumpholz

(Although I really must dissuade him from posting unattractive pictures of myself.)

All Sparkly at the WGA awards! 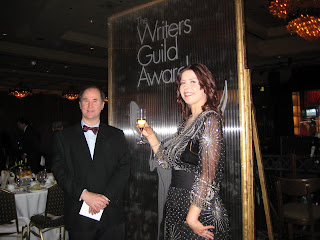 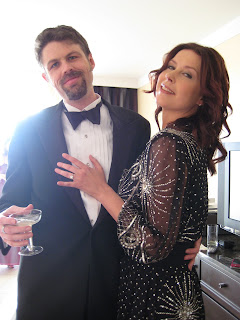 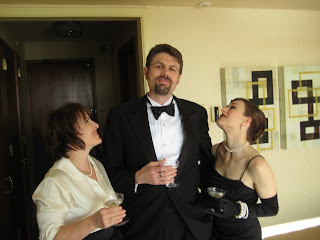 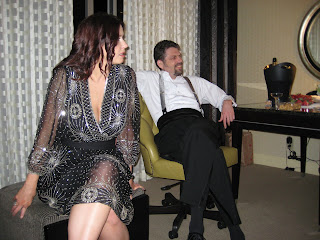 Ben Edlund and Not Annette Bening

During the cocktail hour, before the WGA awards, my friend Kelly and I were admiring the unique worsted wool dress of a woman standing nearby. It looked like a gorgeous garment sewn from the finest dryer lint. I know it's hard to imagine, but I mean it in a very good way. Later, we saw the same woman from the front and I said, "Oh, the worsted wool woman is Annette Bening." She looked fabulous and much younger than I expected, but not in that creepy, 'I've had a lot of work done', sort of way.

After the awards, people were chatting and I saw the remarkably well preserved Annette Bening again. She was smiling and looked very approachable, so I went over to talk. (And mind you, by this time, I had consumed a fair amount of wine to take the sting off of not winning, so I was feeling brave.) I complimented her dress, we chatted. I mentioned how I also liked the green rhinestone FUEL pin she was wearing in promotion of the movie up for best documentary screenplay. She responded by pulling another pin out from under her wrap and handing it to me. At that point I was thinking, "Wow, Annette Bening is really nice and she's giving me jewelry!" It was loud in the room and as I listened to her speak, I thought she had a mild speech impediment... no wait... some kind of accent... a familiar accent... a Danish Accent! Not Annette Bening's name is Bridgette. She is a fabulous Danish woman who is married to either the writer or director of Fuel. (Sadly, I can't remember and no one else seems to remember either.) Her husband was stuck somewhere on a shoot and couldn't make it so she brought her friend Ben.

My third and largest crush of the WGA awards was...

Yes, the creator of The Tick! That Ben Edlund! Super nice, funny, handsome guy. He was also incredibly modest. I looked him up on IMDB and wow has he done a lot. Check it out:

What a sweetheart. Very crush worthy.

Jason, Kelly, Leslie, Ben, Not Annette Bening, another really nice man who makes commercials whose name I currently forget and myself all headed to our room to drink champagne and hang out. Very fun, good conversation, great people.

Halfway through the evening, I saw Ben open the note pad for our room and write something down. The next day, when we were packing up, I thought to look at what he wrote: 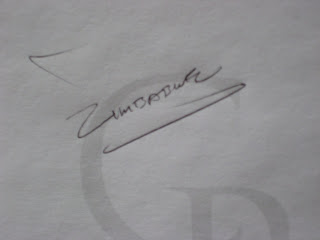 The weird thing is, two weeks ago, I was trying to tell Jason about a country in Africa and couldn't think of the name to save my life. How nice of the creator of The Tick to remind me. He really is a superhero.

Well, it was super fun to be nominated, but what would have been even cooler was to have a bunch of free advertising for Dangerous High School Girls in Trouble and to have a fancy award to dust for the rest of my life. BTW, Haden Blackman, one of the Star Wars guys, let me hold his award (no comment from you, Beavis) and it was awesome. Really nice sculpture with a gorgeous patina.

My second crush of the evening was...

OMG is this man funny. He literally sent my friend Kelly into a mild asthma attack. He is that funny.

And the WGA winner is...

Actually, we met the Star Wars writers and they were very nice.

The event was sparkly and fun. We mingled with and gawked at celebrities, plus there was a feature on DHSGiT in Written By, the WGA magazine.

First observation on Hollywood celebrities, everyone is much smaller than you think. It's like viewing the Mona Lisa. Someone who is listed on IMDB at 6'1" is probably more like 5'8" or 9".

My first crush of the evening and the host of the awards was Neil Patrick Harris. And, let me tell you, gay, straight, whatever, he appeared to be sexy, self deprecating, handsome and did a great job hosting the show. I walked right by him and the man has incredible cheek bones.

The WGA Awards are tomorrow!

Will Dangerous High School Girls in Trouble win for best video game? It'd sure be fun if we did. After the initial shock of being nominated and some high stress shopping looking for a dress, I haven't been thinking about it too much. Now that we are about to head down to LA, I'm excited. It'll be fun to indulge in the fringes of Hollywood glamor. Fingers crossed.

Well, apparently getting a nomination by the WGA lit a fire under Amazon.com and Dangerous High School Girls in Trouble is now available through that site. Sweeeet! If we win, that should definitely boost sales.

Being a giantess in a short city, it's very challenging for me to find anything that fits, let alone a fancy dress for a black-tie award show. I was finding absolutely nothing for the WGA awards. I was in full panic mode, essentially freaking out and feeling like a giant shaved yeti. Thank the gods for my BFFs over at Splendora.com for everything fabulous. They outfitted me in a vintage sequinned dress and some killer silver heels.

Now I'm at least ready for a little Cinderella action if we win!