When You Reach Me - Rebecca Stead

This book has a remarkably complex plot for a middle grade novel. It's set in 1978 New York and the author manages to explain the complexities of time travel without talking down to the reader. I was constantly thinking about time travel when I was a kid (and still do think about it quite a bit) so I'm sure I would have loved this book. A definite read for anyone age 9-12 and a darn good read for anyone older.
Posted by Adrianne at 9:09 AM No comments:

Leigh Dragoon was kind enough to interview me on her website for the launch of Fraggle Rock #3. And don't you just love this girl and bird painting? She's got talent, baby! To read the interview, go here.
Posted by Adrianne at 10:41 AM No comments:

Fraggle Rock #3 is out! Apparently

Well, I haven't seen it yet. Or any art, pages or anything from it, to be honest, but Fraggle Rock #3 is out! Here is the review from Tough Pigs.

I'm all about dystopian YA right now and I highly recommend Uglies by Scott Westerfeld. It really forces you think about how appearance effects behavior and perception. The fact that this novel is YA is particularly good because when you're a teen, it can be challenging to feel confident about your appearance. But there's more to to the story than that. It's all about perception, the value of friendship, how our appreciation of beauty has changed over the centuries and there's a darn good adventure wrapped up in there too.

Posted by Adrianne at 1:08 PM No comments:

Posted by Adrianne at 6:53 PM No comments:

Everyone who is anyone knows that Cleveland is fabulous despite its leftover bad reputation from the 1960s. Clean. Friendly. Great food. Lots to do. Case in point, here's a festival that I just found out about, but it looks like a lot of fun:

Yes, that's right! It's the Avon Heritage Duct Tape Festival! How awesome is that? And they have a great motto. Peace, Love, Duck Tape!
Posted by Adrianne at 1:26 PM No comments:

Mickey Rourke is now in heated competition with Matthew McConaughey for worlds largest head. Seriously, a family of four could comfortably camp out in that man's skull. It's impressive.

LOUD! The movie was painfully loud. At least in the theater where we viewed it. I literally put in the earplugs that I keep in my bag and that made it at least tolerable.

Besides that, it wasn't very interesting. Or, at least I didn't enjoy it very much. There were 6 men sitting in the row in front of us who seemed to enjoy it greatly and cheered when the credits started to roll. So, maybe I wasn't the target audience.

What I Learned From Being a Cheerleader - Cover! 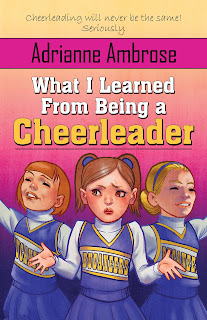 The cover is done. Look how cute! The art was created by the fabulous, Ted Naifeh. I think he really captured the spirit of the book. Only a few more weeks now and this sucker will launch. Pretty exciting.
Posted by Adrianne at 1:40 PM No comments:

What I Learned From Being a Cheerleader - The Video!

Hello - Belle Bridge Books puts out little promotional videos for each of their titles and mine is ready. It's very cute and quirky. Check it out:

What I Learned From Being a Cheerleader Video

Ooh - And you get a peek at the cover at the end!
Posted by Adrianne at 1:31 PM No comments:

Okay, I came to the Firefly party long after the series had been canceled and left original fans in tears, but lately I've been watching the series again and my question is why? Has anyone ever quite figured out why the show was canceled? Too good? I mean Two and a Half Men is going to run until Charlie Sheen breaks a hip, but we only get 14 episodes of Firefly? Was the show too expensive? Does the American viewing public not like well-written adventure shows in space? It is hugely frustrating. (And yes, I know I'm picking at an old wound for many fans - Sorry! - But I am absolutely perplexed.) After reading The Hunger Games, I felt that I had to pick up my writing skills, but maybe only for novels. If I by some bizarre twist of fate I end up writing for television, I'll make sure to lower the bar.

p.s. - As a tidbit after that depressing post, I was at a UA party last year and there was a guy crazy geek dancing. I was watching him for the sheer pleasure of enjoying someone obviously enjoying themselves on the dance floor when my friend leaned over and said, "That's Josh Whedon." Hey, hey, he looked pretty fun.
Posted by Adrianne at 7:15 PM No comments:

What I Learned - Lip Smacker As Scene In

Hey, hey! What I Learned From Being a Cheerleader is posted on Lip Smacker's As Scene In. Pretty fun! To check it out, click here.
Posted by Adrianne at 11:34 AM No comments: