Things that go squawk in the night

Two nights ago, husband and I lay slumbering in our bed, when for no good reason our smoke detector started shrieking, rocketing us onto the ceiling. It lasted for about 5 seconds and then went silent. There was no fire, no smoke, no conceivable reason for it to have scared the living poop out of us. Husband climbed up on a stool and tried to figure out if it needed batteries or something, which was hilarious to me because he sleeps au natural. I was able to go back to sleep, but husband was awake since three a.m..

This morning, 6:15 on a Saturday, we woke to a horrible commotion. It sounded like someone was torturing several chickens and had forgotten to gag them before starting in with the plucking. After lying in bed for several minutes waiting for it to stop, I got up, put on my robe, went out the back door, surveyed the cityscape, identified the source of the noise (our neighbors across the alley) came back in, got dressed, wrote a nasty note explaining that it's unpleasant to be woken up at 6:15 on a Saturday by chickens, especially when you live in a densely populated city and headed outside again. As I began walking down the alley, the neighbor's garage door opened half way and a woman came shimmying out. I asked her what was going on and she explained that one of her chickens had gotten into the neighbor's yard, decided it was a bad idea and set off a series of shrieking that could have woken Colonel Sanders from the dead. She seemed genuinely upset about her chicken, so I didn't rip her head off like I originally intended, but I do wonder why it took her close to thirty minutes to decide to save her precious pet.

Okay, fine. Chickens feather's unruffled, blood pressure dropping to a normal level, cuddling up with husband to get some sleep and then beep, beep, beep, 7:15 and the construction crew down the street decided to put in some Saturday hours. Guess I'll make a pot of coffee.

Feeling the need for a hunky barbarian in your life? Confessions of a Virgin Sacrifice is available for 99 cents on all readers.
Posted by Adrianne at 7:59 AM 2 comments:

Awesome new Fangs for Nothing review by Book Bite Reviews.

Thank you Beckie!
Posted by Adrianne at 7:53 AM No comments:

Turns out Crazy, Stupid Love is a reasonably funny movie. I caught myself laughing out loud at least three times and the people sitting behind us were rolling in the aisle. Definitely a great date movie. Worth the price of admission.

For example, a male character in the movie says, "The war between the sexes is over. We won the day women started pole dancing for exercise."

Posted by Adrianne at 8:20 PM No comments:

New Fangs for Nothing Review

Here's a fun Fangs for Nothing review by the blog Raindrop Reflections.

Super fun What I Learned From Being a Cheerleader interview over at Bibliophilia - Maggie's Bookshelf. It's Maggie's blog, but she let her 11 year old sister, Ellie, interview me. I have to give Ellie credit, she came up with some good questions.

What I Learned From Being a Cheerleader - Free! 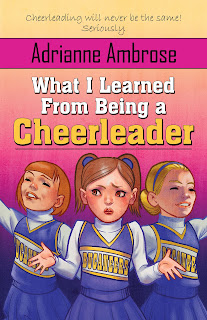 What I Learned From Being a Cheerleader is now on sale at the Kindle store for FREE. Yes, you read that correctly. For a limited time you can download What I Learned to your Kindle or device that has a Kindle app for $0.00. I'm not sure how long the giveaway will last so better to download now than regret it later.
Posted by Adrianne at 1:13 PM 4 comments: