Award winning author Megan Abbott has wowed fans of noir and lovers of good ficiton alike with her hardboiled books including Die a Little, Queenpin, The Song is You, and Bury Me Deep. One of the things I love about Megan's writing is that, even though her stories are usually centered around female characters, she doesn't pull her punches. If you want an intriguing read that's hard to put down, do yourself a favor and check out one of her books.

AA - What is your history with noir? What first drew you to writing in the genre?

MA - Everything I write I can trace back to the movies I watched as a child. My primary fantasy life stemmed from watching old movies on TV on Saturday and Sunday mornings. Somehow, those movies, especially film noir, became the dark foundation for me—they formed the world I wanted to enter, and writing was my way of entering that world. I became fixated on both the worlds of those movies and everything they might be just barely concealing. So when I discovered James Ellroy’s novels in my teens, it brought everything together—the official cultural history and alternative, subterranean truths. I fell head over heels. I wanted « in. » When I write, I tend to even cast my favorite actors. Gloria Grahame appears in almost all my books. As does Ralph Meeker. Steve Cochran. There’s a slightly seedy glamour to all of them, and I think that’s the feel I’m most drawn to, as a writer, reader, spectator, voyeur.

AA - You have a new book coming out. What can you tell us about it? 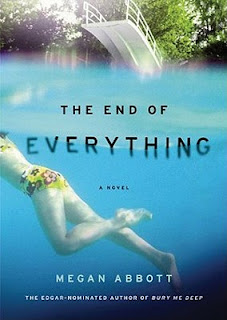 MA - It’s called The End of Everything. Set in the suburbs during the 1980s, it’s the story of Lizzie, a 13-year-old girl, whose best friend, Evie Verver, has disappeared. The two girls have been intensely close in that way young girls can be right before adolescence really crashes in. With Evie gone, and Evie’s glamorous family (a beautiful, popular sister and a handsome, charismatic dad) struggling, Lizzie begins to insert herself into the investigation, unable to stop herself. It’s a big departure for me in terms of time and place, but in most ways, I’m exploring the same dark corners. All my books seem to be about the treacherous journey from innocence to experience. They’re all Little Red Riding Hood.

AA - If you can't say Chandler or Hammett, who is your favorite noir / hardboiled writer. What do you admire about his / her style?
MA - James M. Cain. The Postman Always Rings Twice. Confessional narrative that’s like a whisper in the ear and you can’t stop listening. It’s completely persuasive, utterly cunning and finally heartbreaking.

AA - Why do you think so many noir classics are set in California?

MA - I think because California is, by geographic fate, the dropping-off of the American frontier. Manifest Destiny at its endpoint. You reach your dream here or you’ve lost it forever. The Land of Milk and Honey but also the place of last chances. So many noir characters are there because it’s the last place to go. They can’t run any more.

AA - If you couldn't write noir, what genre do you think you'd write?

MA - I guess I don’t think in terms of genre, as a reader or writer. I never set out to write a noir novel, or a mystery or anything else. I think we all respond to story, voice and character and that’s the main thing I think of when I write. That said, my love of the books and movies dubbed noir is because they are so filled with the big feelings and drives of life—desire, greed, rage, sorrow—and in its purest form. What could be better? That’s terrain I never want to leave and I think you can find that across all the genres. Even writing a book set in the suburbs in the 80s, it felt like I was writing about the same heightened feelings.

AA - Besides the ones you have created in your own books, who is your favorite femme fatale and why?

MA - Oh, there’s too many good ones for me to have to resort to picking one of my own! I’m going with Gene Tierney in Leave Her to Heaven: cold, remorseless, perverse. And so gorgeous you find yourself believing her any way. And that movie disproves the old axiom that noir must be in black and white. In that movie, color—the look of a host flush on the skin, the glaciality of Tierney’s’ eyes—make for pitch-black noir.

AA - Have any words of hardboiled slang crept into your daily usage? If yes, which ones?
MA - I don’t think I use it much in speech, though I hear the slang in my head all the time. To me, they’re part of my unconscious, the life of my brain. Though occasionally I do want to describe someone as a blonde who could make a bishop kick a hole through a stained-glass window. And sometimes I want to walk into a room and ask, “What’s the rumpus?” I also use “stooge,” “patsy,” “hoosgow,” “high-hat” and “gunsel” sometimes. Gosh, I guess they have crept in!

AA - What is one of your favorite lines from your book that's about to launch?

MA - “I know everything.” The 13-year-old narrator says it so many times and every time she’s wrong.